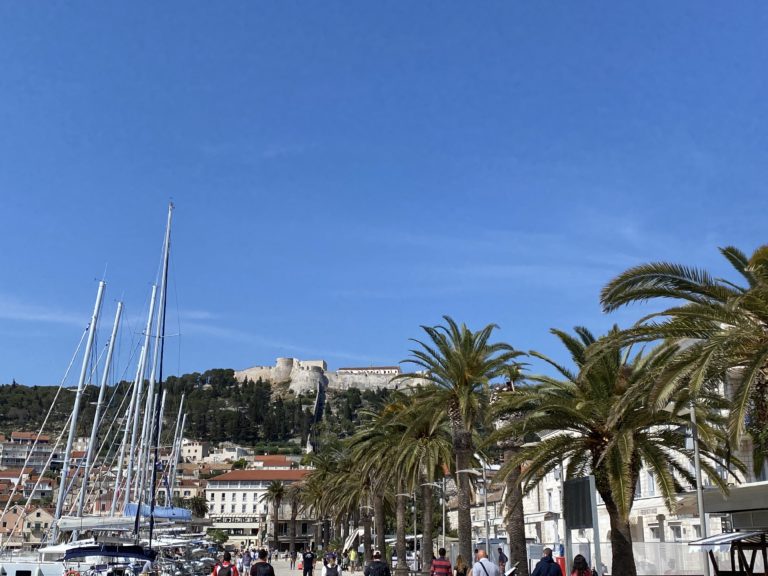 We flew from Bristol to Split with Easyjet, on arrival we transferred to Podstrana, to take a look around one of the Charter Boats (similar to the one we are using for NT Croatia).

Lovely boat, easy to get on/off. Fantastic sun deck with loungers and chairs, large dining room inc. bar area. Dining room set up with large round tables for 6-8 per table. Meals on-board would be breakfast and lunch as half board. She sails during the morning where guests can swim off of boat, after lunch she will moor up for the rest of the day at a local town for sightseeing and for guests to have their own time ashore and to eat where they choose for evening meal.

She had 18 cabins, all of high spec, the lower deck cabins had Windows high up, so you get natural light but not a view per se (similar to low deck cabin on a river cruise).The main Deck cabins have picture windows. All cabins vary slightly in size and usually the allocation of cabins is on a first book gets the best cabin basis etc. We had lunch on board which was done special for us, family platters to share, this would not be the usual thing the guests would have. The food was delicious though.

Our hotel for the night was the Le Meridien Lav, Podstrana. 5* beach front property, typical of Le Meridien. Slightly on the corporate side, with a large reception leading into an open plan bar area. There was a conference going on when we were there and I would assume this is a regular thing. It didn’t interfere with us though and the hotel was still relaxing and peaceful. 378 guest rooms and suites, floor to ceiling windows that open on to large balconies. We had tea & coffee making facilities in the room. Breakfast and dinner was delicious.

After breakfast we transferred by taxi into Split where we had lunch at a tiny restaurant about 8 mins walk to the ferry port.

The catamaran ferry to Hvar cost £5 one way and took just over 1 hour, this was an older catamaran but fairly comfortable with a bar on board. It was fairly busy but getting on and off took maybe about 10mins. Arriving in Hvar the views were fantastic, it is really a picturesque port to step ashore into. We were in fairly early season so it was all relatively quiet, be aware though that in the summer, Hvar turns into a vibrant party scene.

We walked along the front to visit Adriana Hvar Hotel & Spa. Ideally located in the heart of Hvar, on the promenade. Beautiful views of the town of Hvar with boats bobbing moored up in the sea. The hotel is 4* and looks traditional from the outside but tres chic, modern, attracting a trendy and stylish crowd. Offering 50 deluxe guest rooms and 9 suites.

It also has the most fantastic rooftop bar with the best views. From this side you do not get to see the sunset, but what you do see are the beautiful pale stone houses of Hvar get bathed in reds, purple, and pink hues as the sun sets, it really is breath-taking. I wish we could have stayed here.

Our hotel for the night was 4*Amfora Hvar, located in a private bay, this is a large sprawling hotel, with a huge pool scene and a party vibe, akin to that in Ibiza. I would say that it attracts a younger guest. It looked like there was a hen party there and groups of lads, all parading around with their amazing bodies. Inside the hotel reception area is large and the bedrooms are over several wings of the hotel. The bedrooms were smaller than the Le Meridien, no tea or coffee in bedrooms, but the bedrooms even though smaller were really excellent and with a lovely bathroom. This hotel has 324 rooms inc. suites. Breakfast was amazing with everything you could possibly want to eat. I would suggest only B&B at this hotel as it’s a short walk 10 mins into Hvar with plenty of choice of restaurants. 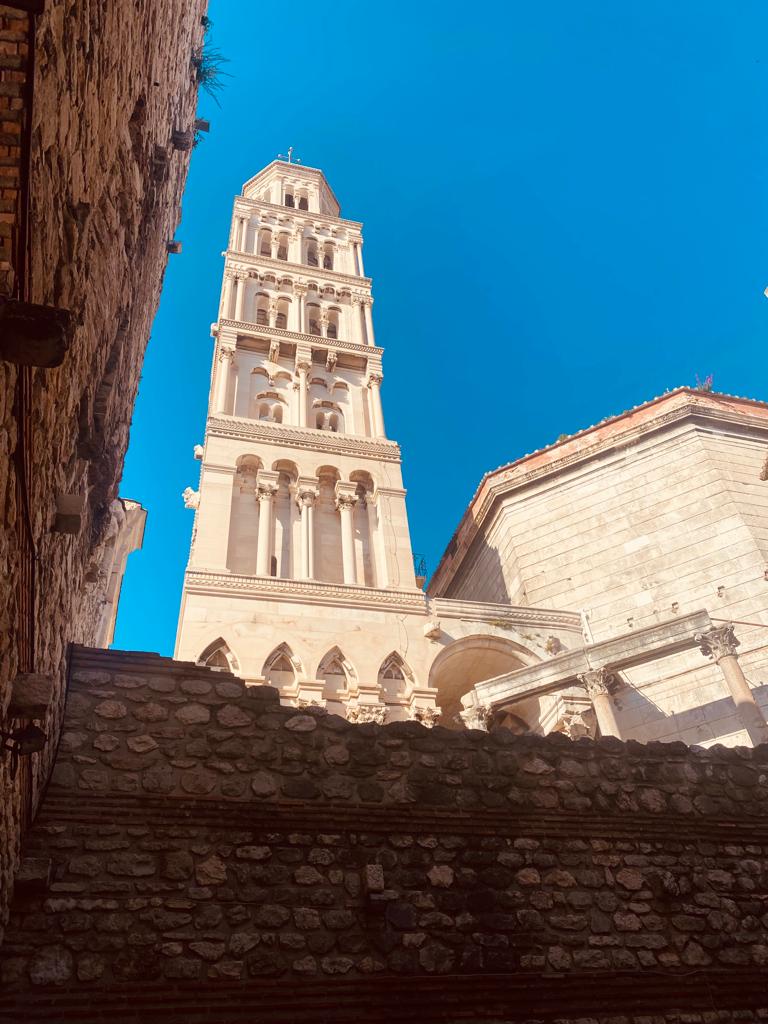 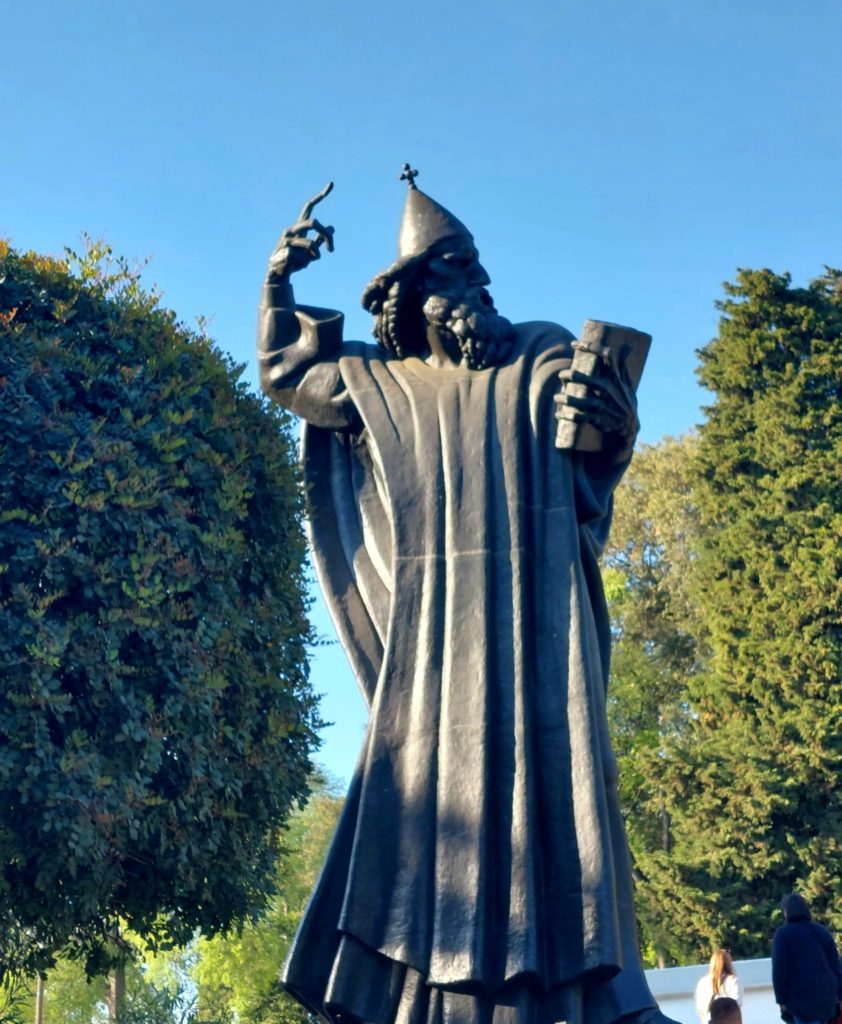 After breakfast we took the new catamaran £16 one-way back to Split, this was a much better plusher ferry ride. We transferred straight to our hotel, Park Hotel Split, 5* and the leading hotel in Split. Art Deco inside with its own personalised scent wafting around and a piano tinkling from some far off corner, it is truly a delight on the senses.

We had lunch on arrival which was quite honestly one of the best meals I have ever eaten, with attentive but not intrusive waiters. With a total of 65 rooms including suites, junior suites all with various views. We had standard twins with inland view. The room was small but just adorable with dual aspect Windows and everything you could possibly require in a hotel bed room. It has a lovely pool area and there is also a beach right in front, the walk into Split would take about 20 mins but is on the flat.

In the afternoon we took a walking tour of Split around the Diocletian’s Palace, a 4th century palace with fortified towers and walls, the cellar rooms are still intact. If you watched “Game of Thrones”, it’s when Daenerys kept her dragons locked up. After you pass through the cellar area you are then in the middle of the palace, which is filled with little cobbled streets bursting with shops, cafes and restaurants. It is just a fantastic area and one that I would very much like to re-visit. We dined out for dinner in a restaurant in this area and the food was delicious, Split old town is bustling and an absolute delight to be in.

When I go back to Split I will only be booking B&B as the local food is amazing!

Get in Touch with us

We use cookies on our website to give you the most relevant experience by remembering your preferences and repeat visits. By clicking “Accept”, you consent to the use of ALL the cookies.
Cookie settingsACCEPT
Manage consent

This website uses cookies to improve your experience while you navigate through the website. Out of these, the cookies that are categorized as necessary are stored on your browser as they are essential for the working of basic functionalities of the website. We also use third-party cookies that help us analyze and understand how you use this website. These cookies will be stored in your browser only with your consent. You also have the option to opt-out of these cookies. But opting out of some of these cookies may affect your browsing experience.
Necessary Always Enabled
Necessary cookies are absolutely essential for the website to function properly. These cookies ensure basic functionalities and security features of the website, anonymously.
Functional
Functional cookies help to perform certain functionalities like sharing the content of the website on social media platforms, collect feedbacks, and other third-party features.
Performance
Performance cookies are used to understand and analyze the key performance indexes of the website which helps in delivering a better user experience for the visitors.
Analytics
Analytical cookies are used to understand how visitors interact with the website. These cookies help provide information on metrics the number of visitors, bounce rate, traffic source, etc.
Advertisement
Advertisement cookies are used to provide visitors with relevant ads and marketing campaigns. These cookies track visitors across websites and collect information to provide customized ads.
Others
Other uncategorized cookies are those that are being analyzed and have not been classified into a category as yet.
SAVE & ACCEPT